How Does Hair of the Dog Work?

“I pray thee let me and my fellow have
A hair of the dog that bit us last night –
And bitten were we both to the brain aright.
We saw each other drunk in the good ale glass.” 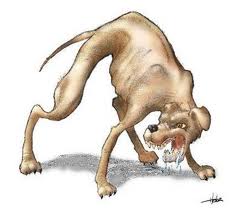 The phrase originally comes from the medieval belief that when bitten by a rabid dog one could prevent the onset of rabies by placing a hair from the tail of the infected dog into the wound. Although this rabies remedy is obviously useless, in the 16th century the phrase began to be applied in the ‘like cures like’ context that most of us are all too familiar with: have another drink in order to alleviate the hangover. Does the fact that the phrase has survived to the 21st century lend the idea some credibility? Well, for those of us who have had need to resort to this tactic (myself included!) the general consensus* is that it does seem to be effective. So what’s going on?

The metabolism of alcohol (ethanol) undergoes a two-step process whereby an enzyme breaks down the alcohol molecule first into acetaldehyde and then a second enzyme further breaks it down into acetate. Acetaldehyde is probably responsible for a lot of the typical hangover symptoms but is broken down fairly rapidly. However, most alcoholic drinks contain other biologically active compounds called congeners, which are produced during the production of alcohol i.e. during the fermentation process, aging or even intentionally added in order to improve the taste or smell of the beverage.

The major congener culprit involved in hangovers is methanol, which is broken down in a similar two-step process and requires the use of the same enzymes. However, the two products of methanol metabolism (formaldehyde and formic acid) are very toxic indeed (and in very high concentrations can cause blindness and even death). The enzymes that break down ethanol and methanol bind preferentially to the ethanol and so the methanol will remain in its harmless state until blood alcohol levels are practically at zero. Now the enzymes are free to get started on the methanol, breaking it down into the highly toxic formaldehyde and formic acid. It’s at this point you’re feeling awful (far more awful than the ethanol metabolites made you feel!) and trying to decide whether to ride it out or… have ‘hair of the dog’! If you reach for that Bloody Mary then you are ingesting more ethanol thus blocking the further breakdown of the methanol and its toxic metabolites, as the enzymes will be once again busy with the ethanol in the Bloody Mary.

As you may have guessed by now, the hangover cannot be delayed indefinitely, at some point you will have to stop drinking and suffer the hangover (and probably show your face in the office too).

*Source: all the people at my table in Taafes Bar, Galway, Ireland 2012

This entry was posted on Tuesday, January 24th, 2012 at 12:55 pm and is filed under Adult Science, Fun Science, Human Biology. You can follow any responses to this entry through the RSS 2.0 feed. You can leave a response, or trackback from your own site.

One Response to How Does Hair of the Dog Work?

What do you think? Cancel reply